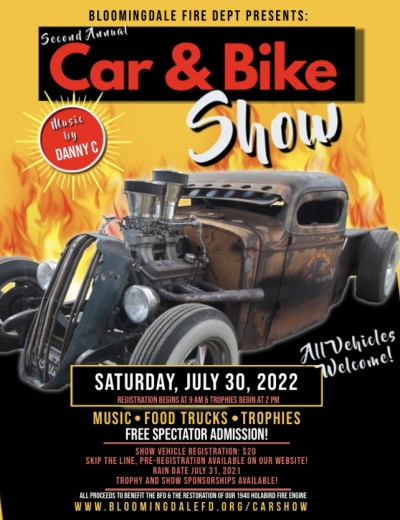 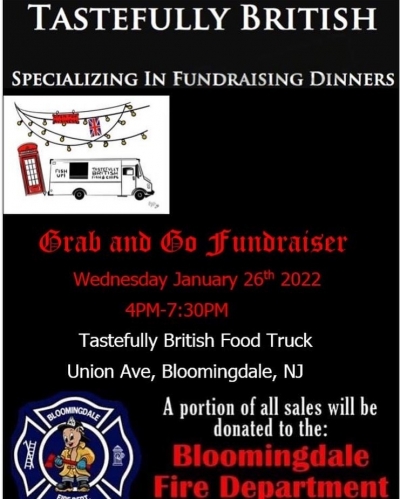 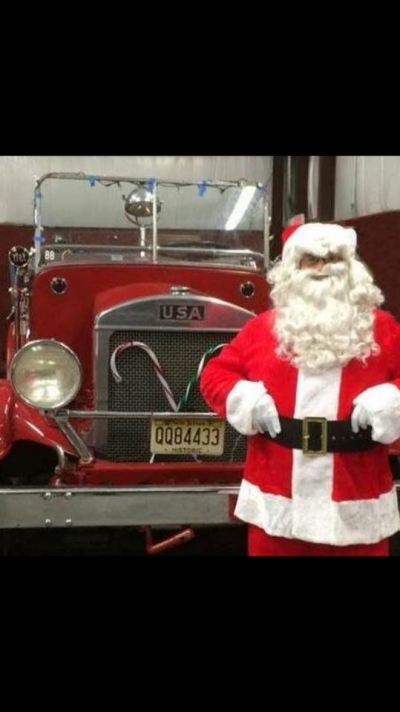 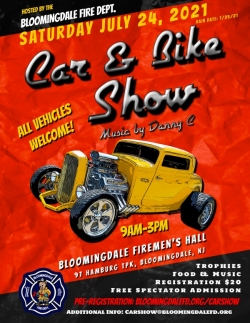 The BFD is hosting a Car & Bike Show on Saturday, July 24th, 2021 from 9 am to 3 pm at the Bloomingdale Firemen's Hall, 97 Hamburg Tpk., Bloomingdale, NJ. Music and entertainment to be provide...
➜
News
BFD makes quick work of Structure Fire

Just after midnight on July 16, 2017, the Bloomingdale Fire Department was dispatched to an activated fire alarm at a residence on South Road. The resident reported that she smelled smoke in the house. Upon arrival of the first in engines, the resident had exited the house along with several pets. The house was filled with smoke upon arrival. The fire was located in the basement and first floor quickly extinguished by interior crews. Also responding were Butler Fire Department, Kinnelon Volunteer Fire Company, Pompton Lakes Fire Department, Tri-Boro First Aid Squad and Pompton Lakes Riverdale First Aid Squad. There were no reported injuries. The fire is under investigation at this time

×
1 of 32 of 33 of 3
53 entries in the News
BFD's First Annual Christmas Tree Sale
Our First Annual Christmas Tree Sale will take place on December 8 (4 pm - 8 pm), December 9 (10 am - 6 pm), and if trees are still available December 10 (11 am - 3 pm). Our tree lot will be set up at the Firemen's Hall, 97 Hamburg Tpk, Bloomingdale.
➜
Kidde Fire Extinguisher Recall
Please check out the link below regarding the Kidde Fire Extinguisher Recall:http://www.kidde.com/home-safety/en/us/support/product-alerts/recall-of-industrial-fire-extinguishers/fx-recall-affected-models/
➜
BFD makes quick work of Structure Fire
Just after midnight on July 16, 2017, the Bloomingdale Fire Department was dispatched to an activated fire alarm at a residence on South Road. The resident reported that she smelled smoke in the house. Upon arrival of the first in engines, the resident had exited the house along with several pets. ...
➜
Bloomingdale Fireworks Postponed
The town fireworks have been postponed to the rain date of Saturday 6/24.
USA makes debut in Memorial Day Parade

Following months of hard work from our members and the guys at Black Oak Auto Body, the USA debuts its fresh paint job and new running boards in the Memorial Day Parade.
Hook & Ladder Comedy Night 2017 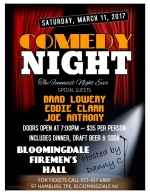 Come join the Bloomingdale Fire Department Hook & Ladder Company and the legendary "Danny C" as he hosts our 7th Annual Comedy Night on March 11th at 7:00 pm. Danny has put together a great lineup for us including: Brad Lowery, Eddie Clark, and Joe Anthony.
➜
BFD rescue deer from reservoir in Kinnelon 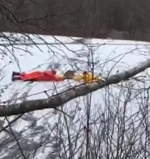 The Bloomingdale FD was requested by Kinnelon to rescue a deer that had fallen in to a reservoir off Boonton Ave. Crews from 664 and 663 were able to assist the animal to land with out incident. You can check out the video and write up from the Kinnelon Police Department here: https://www.facebook.c...
➜
Help make the USA great again! Pancake Breakfast Fundraiser on 10/23

In 2010, just days before the BFD's 100th Anniversary Celebration, we wee able to locate and bring home the "USA," a 1940 Holabird BF750 pumper built by the US tArmy. We have been painstakingly working to restore the truck to its former glory by tackling many mechanical issues over the...
➜
5k, Poker Run and Cruise Night T-shirts are now available!
You can order your shirts here: http://bloomingdalefd.org/store.html
Firefighter Bob Kochka Poker Run
The Bloomingdale Fire Department is sponsoring the Firefighter Bob Kochka Poker Run on Saturday, July 9, 2016 (Rain Date July 10th). The ride will start at the Bloomingdale Fireman's Hall with registration from 9 am to 11 am.
➜
Busy Saturday for the BFD
On Saturday morning, fire department members were dispatched to a report of a fire outside the home. Upon arriving on scene, Car 666, found a small outside the home extending to the home. Crews of 661 and 664 rapidly extinguished the fire and overhauled the area with no further damage to the home.
➜
Bloomingdale responds mutual aid to Butler Kitchen Fire
Engine 661 and Ladder 664 responded to a report of a kitchen fire on Third Street in Butler. Upon arriving on scene, 661 and 664 aided the Butler Fire Department in ventilating and securing the scene.
Department responds to Possible Structure Fire
The Bloomingdale Fire Department was dispatched to a possible structure fire in the area of Macopin Rd and the townline on the evening of January 6, 2016. Upon arrival 667 found a fully involved cabin fire in Camp Vacamas, which straddles the border of Bloomingdale and West Milford.
➜
Ladder and Engine respond mutual aid to Butler
In the early morning hours of Tuesday, December 8, Ladder 664 and Engine 661 responded to reports of a working fire in Butler. Bloomingdale Crews arrived behind Butler Units to fire showing from the building.
➜
Santa Claus is coming to town!

We will be hosting a Pancake Breakfast on November 8, 2015 from 8 am until noon at the Bloomingdale Firemen's Hall. Tickets are available at the door: $8 for Adults, $7 for Seniors, and $5 for Kids under 12.
➜
Pancake Breakfast for the "USA"

We will be hosting a Pancake Breakfast on November 8, 2015 from 8 am until noon at the Bloomingdale Firemen's Hall. Tickets are available at the door: $8 for Adults, $7 for Seniors, and $5 for Kids under 12.
➜
5K and Cruise Night a huge success thanks to our participants, sponsors, and the community!

The annual Bob Kochka 5K and Cruise Night to benefit Pancreatic Cancer Research continues to grow with 262 runners, up from last year. Along with a well attended cruise night before the race. We would like to thank the support of our sponsors, participants, community, police department, first aid sq...
➜
Poker Run this Sunday! 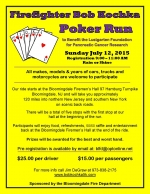 This Sunday, July 12th The BFD is sponsoring the Fireighter Bob Kochka Poker Run to Benefit the Lustgarten Foundation for Pancreatic Research. We welcome all makes, models, and years of cars, trucks, and motorcycles to participate.
➜
Reminder: Ziti Dinner Tomorrow May 20th 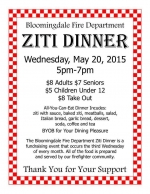 The firefighters of the BFD will be serving a ziti dinner featuring Ziti, Meatballs, Salad, Garlic Bread, Soda, Coffee, Tea and Dessert from 5 to 7 on Wednesday May 20th at the Firemen's Hall, 97 Hamburg Tpk.
➜
1 of 32 of 33 of 3
53 entries in the News
Car & Bike Show

This site has been viewed 600,498 times.
News
Events
Pictures
Apparatus
Maintained by the members and staff of Bloomingdale Fire Department. Designated trademarks and brands are the property of their respective owners. Copyright © 2006-2022. YourFirstDue Inc. All Rights Reserved. Content on this web site is supplied by Bloomingdale Fire Department. YourFirstDue Inc. cannot be held responsible or liable for any content, text, pictures, or any other media found on this web site.
Management login
Powered by